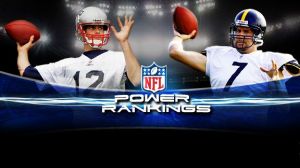 2.  New England Patriots:  Tom Brady has cooled off a little from his record breaking start but the AFC will still go through New England this year.

3.  Pittsburgh Steelers:  After getting blown out in week 1 against the Ravens, the Steelers have answered the question of “Are they too old”.

4.  San Francisco 49ers:  Jim Harbaugh has come in and made the San Francisco 49ers one of the more disciplined teams in the league.  If Alex Smith can can become the quarterback the 49ers thought he could be when drafting him, look out.

6.  Buffalo Bills:  One of the bigger surprises this year in the NFL.  They come off a bye, we will see if they can keep the momentum going.

7.  Baltimore Ravens:  Ray Rice getting 8 carries against the Jaguars, defense calling out the head coach, losing to a terrible team on Monday Night Football.  The Ravens went from a top 3 teams in the league to a lot of questions that need to be answered.

9.  New York Jets:  Big home win against the Chargers.  Plaxico Burress with 3 TD catches.  If he has shaken the rust off, this could be the surge the Jets have been waiting for.

10. Atlanta Falcons:  With Julio Jones out with an injury the Falcons rediscovered they have Michael Turner.  The Falcons need to be a run first offense in order to be successful.

11.  San Diego Chargers:  Year in and year out the most disappointing teams in the NFL.  Phillip Rivers has more interceptions this year than touchdown passes.

12.  Houston Texans:  With the Colts out of it, this was the year for Houston to take advantage and win the division.  Andre Johnson should be making his return soon.  Look for the Texans to make a late season surge.

13.  Chicago Bears:  The Bears won’t be able to advance deep in the playoffs as long as Jay Cutler is laying on his back.  They must shore up the offensive line and find a WR that will step up.

14.  New York Giants:  The Giants find themselves in first place even with all the season ending injuries on their defense.  As the season wears on, will they be able to keep pace?

15.  Dallas Cowboys:  St Louis was unable to stop DeMarco Murray last week.  He may have passed Felix Jones on the depth chart.  If the running game can be a consistent threat, that will take the pressure off of Tony Romo.

16.  Cincinnati Bengals:  They are a young team but showing a lot of promise.  The Andy Dalton to AJ Green connection may make people forget about Palmer to Ocho Cinco.

17.  Tampa Bay Buccaneers:  Josh Freeman has been unable to repeat what he did last year.  Losing Ernest Graham for the year will be a big blow to a team already struggling.

18.  Oakland Raiders:  The Carson Palmer era did not get off to a good start.  He has a bye week to prepare for the Denver Broncos.  McFadden’s ankle injury remains a concern.

19.  Philadelphia Eagles:  Probably the biggest disappointment in the NFL this year.  “Dream Teams” do not start the season 2-4.

20.  Washington Redskins:  John Beck at QB, injuries to the running back position, poor defense.  This season could turn into a long one for the Redskins after starting the season with so much promise.

21.  Tennessee Titans:  They took a chance on Randy Moss last year.  Will they take a chance on Terrell Owens this year?

22.  Kansas City Chiefs:  The Chiefs started the season 0-3.  They are now 3-3.  Big Monday Night Football game against the Chargers.  If the Chiefs win they can put a lot of pressure on San Diego.

23.  Carolina Panthers:  Their record is only 2-5 but after going 1-15 last year Panthers fans have to be happy.  Cam Newton has proven he can not only play in the NFL but can make a lot of plays most QBs cannot.

24.  Jacksonville Jaguars:  Big upset win last week against the Ravens.  Is their defense as good as it looked, or were the Ravens just that bad last week?

25.  Cleveland Browns:  The Madden Curse strikes again as RB Peyton Hillis has been nowhere close to his 2010 form.

27.  Minnesota Vikings:  Christan Ponder looked good against the Packers and showed why he took the starting job over Donovan McNabb.

28.  Arizona Cardinals:  Do you think the Cardinals would like to reevaluate signing Kevin Kolb?

29.  Denver Broncos:  Can Tim Tebow play well for more than 5 minutes?  We will find out this week as they host the Detroit Lions.

31.  Indianapolis Colts:  Can a player be voted as Most Valuable Player if he never plays in a game?  Peyton Manning is proving just how important he is to the Colts offense.

32.  Miami Dolphins:  The Dolphins may end up getting Andrew Luck, but it won’t be Tony Sparano coaching him.  Sparano has listed his house for sale in Miami and rumors say Bill Cowher and Jon Gruden may be interested in coaching the Dolphins next year.

What do you think of the rankings?  What teams are too high or too low?  Let us know your thoughts.  Don’t forget to visit www.biginthegame.com for all of your ticket needs.  Promo code: WordPress